CCR Re maintained its record of profitable growth, reporting an increase in premium income (up 21%), an improvement in the Non-Life combined ratio (98.1%) and stable net income(€35 million).

Gross written premium totaled €562 million, up 21% compared with 2018 (including 18% growth at constant exchange rates). The business mix was as follows: 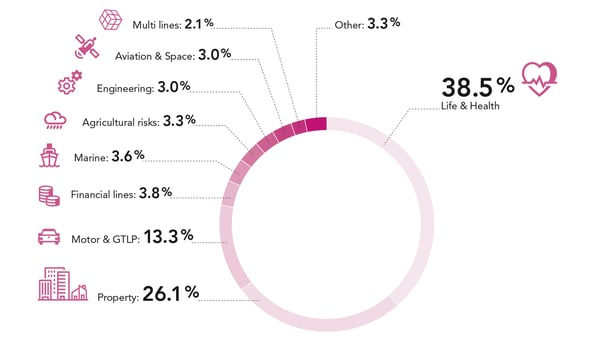 Portfolio profitability continued to strengthen during the year. Non-Life combined ratio improved significantly, falling to 98.1% despite significant Nat Cat loss ratio, as was the case in 2018, especially in Japan. Life reinsurance margin was amounted to 5.2%.

Current income before equalization reserve amounted to €56 million, up 23% on 2018.

Receive financial information from CCR Re

📄 Press release - CCR sets a new course for CCR Re

CCR’s Board of Directors met today and passed a set of resolutions aimed at driving growth at its market subsidiary, CCR Re, in line with CCR’s strategic…

CCR Re’s 2021 financial statements were approved for publication by the company’s Board of Directors. CCR Re was unaffected by the current health…

The CCR Group is supporting Ardian and FiveTHydrogen in the creation of the world’s largest fund dedicated to low-carbon hydrogen infrastructure.👇