Hello, I’m Chrystelle Busque, Chief Financial Officer of CCR Group. Since 2015, I’m in charge of Accounting, Controlling Investment and Treasury. I manage a team of 40 people.

My academic background is both scientific and economic, I’m an engineer and I have a Master’s Degree in Finance. I started my career in Mali, where I worked for an NGO for 2 years. Then I was an auditor for 3 years at Andersen. And 20 years ago I joined the insurance and reinsurance industry. First at Allianz, in the International Division and then as Head of Finance and Controlling for the Caribbean and Pacific Regions. Finally, in 2008 I joined CCR. Where I’ve been a member of the Executive Committee since 2012.

Do you see a balance between men and women in the financial industry?

What are the prejudices about women ?

One of the prejudice we have is that a woman is a helper and not a leader. It’s important to be aware of these prejudices. Knowing that they're just prejudices and not reality.

What would you say to people questioning the importance of gender equality?

It's important, because diversity is a source of richness. It also increases your pool of potential talents. Generally speaking, diversity of gender, origin, age, academic background brings greater opportunities and ideas. It leads the group forward by making it more intelligent. It's a shame that women are less paid than men. Every study confirms this! At CCR our Human Ressources focus on this issue. Every year we review the salary of our teams. We are perfectly aware of the gap between men and women and we’re working at closing the gap.

How should men act in the industry?

Being aware of these prejudices. Helping women climb the corporate ladder.

What would you say to other women in the industry?

Don’t create imaginary barriers in your head and go through the real ones you may face. 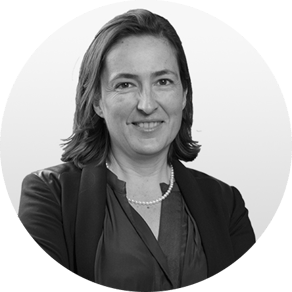