Hi, my name is Yang Du. I joined CCR Re as a Non-Life Underwriter in 2018. I’m in charge of our market in Mainland China and South-East Asian countries. Before that I worked for another reinsurance company in Zurich for 5 years.

I grew up in China and I arrived in France in 2008 for my studies. I’ve done a preparatory class in Bordeaux, and then got my Master’s Degree in Acturial and Financial Science at ISFA School in Lyon. Then I started my first job and moved to Zurich. I decided to move back to Paris 2 years ago.

What do you think on being a woman at this position?

I don’t think that gender makes a difference in my position. Anyone who knows the business, the market, who has good communication and negotiation skills. Who likes to travel and meet clients, can fit the job perfectly.

Do you feel a difference of consideration in the way people interact with you?

No! I mean maybe at a later stage in my career when I reach a higher position. I might see a difference of considerations. But so far I’ve never experienced this kind of situation.

What do you think about working at CCR Re?

At CCR Re we always encourage women to raise their voice, to be heard. The message I have since the beginning is that no matter your gender, age, nationality, if you work hard and have talent, you will be seen. For example, we have a couple of C-level positions occupied by women. I think you already have interviewed some of them. We also try to increase parity and reduce the pay gap between male and female employees.

What would you say to other women in the (re)insurance industry?

I’m very proud of what I see today. A lot of women are in positions with high responsibilities, respected for their knowledge, influence and leadership. What I want to say to other women and to myself, is never underestimate yourself and don’t be shy to show your value.

There’s no limit for us!

What would you say to men in the (re)insurance industry?

I’d like to say “Please treat men and women equally”. If you’re a boss, please show your female colleagues as much respect as to others. Your decisions should never be based on gender. If you're an employee, and imagine that you have 2 bosses, one man, one woman. Just don’t say that your female boss is too bossy and that your male boss is more competent even though they do the same things the same way.

Do you think that gender equality is progressing worldwide?

I didn’t experience any gender inequality myself. But I know that compared to the past, there has been a lot of progress. Especially in some countries. For example, female infanticide is less and less common. More girls are going to school now. More women are taking leadership positions in politics, businesses and corporations. Regarding the insurance and reinsurance industry. I don't know how it was before my generation. But today we see lots of women in Senior Management positions. And I think that the consideration between male and female employees is more balanced.

What would you say to men regarding gender equality?

Very often when we talk about gender inequality. We think that women are the only victims. But I think that gender bias can also disadvantage men. Because we don’t just stereotype men and women, we also stereotype jobs, lifestyles etc.

Who said women have to get married and give birth before they turn 35? Or have to stay at home, clean the house and wait for their husband?

And men have to work hard, earn a lot of money, otherwise they’ll be labelled as “loser”. Of course we can choose the life we want to live. But it’s not a must-do. 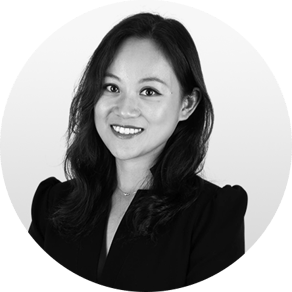 Can you introduce yourself? Hi, my name is Sylvie Chanh, I’m 40 years old. Mother of 2 young kids and married. I have a legal background. I’m Head of…